I see myself as very privileged to enjoy a day alone with my daughter once per week. There are many aspects to it: it is a great thing for the relation with my wife, since I now know that taking care of the household and of our daughter is equally consuming as a “normal” paid job. And I also get to be part of my daughter’s first experiences in the world. With a little bit over three years old she is constantly asking “Why this, why that” and everytime I’m trying hard to give an explanation which is understandable to her and still more or less correct. This can be very challenging but it is extremely rewarding when a few days afterwards parts of what I have explained are being repeated by her or even put in a bigger context.

This morning I was cleaning up the house a bit and put the Android tablet to charge. She observed me and then asked: “Why do we have to charge the tablet, daddy?” Wow, where to start answering that? I tried my best to explain her that there is some kind of storage of electricity that gets depleted while we are using the tablet (especially when watching cartoons;-)). Then: “What is electricity, daddy?” Hm, adding one more layer of abstraction didn’t work this time:-). I started naming some devices that run off electricity and she added a few that came to her mind. It was at this moment that I remembered an experiment in one of my favourite childhood books: The Potato Battery. While I was collecting the dirty clothes for the laundry I was wondering if we would have everything in the house to try that experiment. 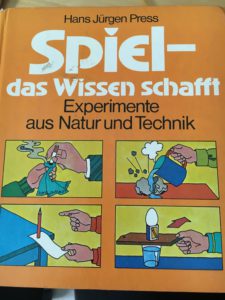 One of my favourite childhood books with lots of simple experiments

Half an our later in our morning break I googled for “Potato Battery” and came to this Wikipedia Article https://en.wikipedia.org/wiki/Lemon_battery Ok, it seems that potato batteries are nowadays made with lemons? No problem, we just had a few lemons ready to try it out. I picked up a few nails from the toolbox, cut a few pieces of copper wire and sat down with my daughter at the kitchen table and start experimenting. First we tried different nails together with the copper. Not surprisingly the galvanized nail had the highest voltage: 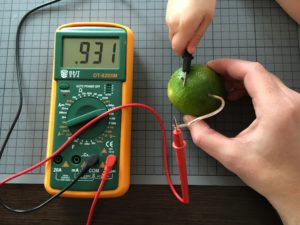 My goal was to demonstrate electricity to my daughter with something a little bit more understandable than the readings from a multimeter, since she cannot read the numbers yet. So, as suggested in the Wikipedia article I wanted to get an LED to shine. 0.9V wouldn’t be enough to make that happen, so we got a few more lemons and put them into series: 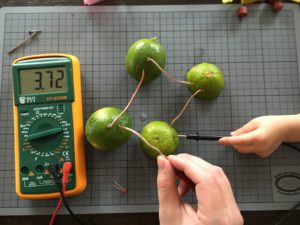 Now the voltage looked fine but the current wasn’t strong enough: you could barely see a light. Certainly not enough to impress my daughter and far to few to take a picture. So I decided to do a Pivot: if the minimal viable lemon battery wasn’t gonna work, maybe the minimal viable potato battery would! This time I cut a tiny potato into four pieces and chained them up again: 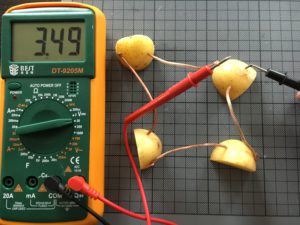 Potato Battery: Slightly lower voltage but with higher current for lighting up the LED

During the breaks my daughter entertained herself by using the connection test on the multimeter: plastic spoons don’t make the device “piep”, metal spoons do! Wood doesn’t, her toy vegetable can does, but only on the inside and not on the painted outside!

After this successful first Daddy Science Day I plan to find another nice experiment next week. If you’re interested please follow me on Twitter, Google+, LinkedIn. Stay tuned!

Now a beer! Did you like this post? It often takes me several hours of my free time to write one. If I was your neighbour would you offer me a beer for the hard work I did for you? The beauty is: beers can be teletransported with a painless donation using Paypal. A beer in a Swiss bar costs about USD $4.80. Or use this affiliate link if you order something on Banggood and I'll get a small kickback. Thank you!
+11
Tweet
Share38
Pin
Shares 39